If You Debate Stupid – What Does That Make You?

THEY WANT TO SUCK YOU-IN . . . TO GIVE THEMSELVES CREDIBILITY:

Anne & I Have a Gorgeous 3 1/2-Month-Old European Bred German Shepherd Puppy, Which We Bought At 3-Weeks-Old.

If Your Puppy, Kitten, Yearling – Etc . . . Has the Right Stuff (Mental Foundation) To-Begin-With, How that Animal is Going to Turn-Out (Mature) is Entirely (100%) the Result of how that Animal was Raised, Nurtured & Believe it or Not . . . TAUGHT VALUES.

You Can’t Argue, Reason . . . Or Debate With An Animal Whose Mind Is Mush . . . No Less a Person. Because . . . In the Final Analysis – All You’ll Get Will Be A Bad Result.  And that’s where we are Today with our WOKE Idiots. They Want us to Debate with them, so that we will Get Right Down in the Mud where they Have Nothing to Lose, and we Have Nothing to Gain.

Tavor Is A Magnificent Puppy . . . He has Everything a Puppy Needs Psychologically to be Great. And How Tavor is Going to Develop as a Full-Grown Dog will Depend ENTIRELY on How Anne & I Raise & Train Him.

Having any Puppy, but Especially a German Shepherd Puppy Bred from a Working Dog Line (Guard, Police & Military), with a Strong Prey Drive, is a Great Deal of Work, Patience, Frustration & Obligation. But with the Right Amount of Commitment & Training . . . A Good Dog Becomes A Great Dog, and a Dog that Could have been Great, but was Never Nurtured or Trained Properly is Usually at Best a Nuisance and at Worst a Problem.

Same Can Be Said About Children. We’re Seeing It Today. 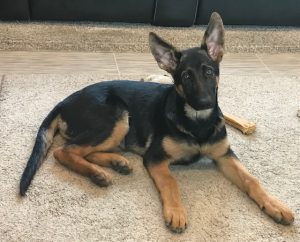 This Is Tavor Photographed Yesterday At 3 1/2 Months

We Call Him Tavor, Which Has Three Meanings For Us . . .

SECOND – A Tavor Happens to be One of the Very Best Assault Bullpup Carbines on the Market, which is Made in Israel.

THIRD – There Were Two Significant Battles at the Mount of Tabor (Biblical Spelling).

The First Happened 12-Hundred Years Before The Birth Of Christ & 200-Years Before King David, when a Jewish Israelite Heroine (Deborah) Ordered Her Generals into Combat Against the Vastly Superior Armored Troops of the Canaanites, where the Israelites Emerged Victorious, which Established Israel as the Land of the Jews.

The Second Battle Of Mount Tabor (1799), Pitted Napoleon Bonaparte’s French Legion Against a Turkish Army, which was Far Superior in Numbers to the French, but was Nonetheless Routed because of Napoleon’s Superior Military Strategy.

Which Brings Me To Why We Call Our Beautiful Puppy Tavor.

THE BREEDERS . . . Where we Bought Tavor are Located in Fort Langley BC, just 10-Minutes or so from where Anne & I were Spending our Winter. And What was Most Interesting . . . No-One in Canada which we could Find, and Believe-Me we Tried, had Puppies for Sale, Especially European Bred German Shepherd Puppies of Excellent Breeding.

For Us . . . Nothing Would Suffice – Other than A European Bred German Shepherd Puppy from Excellent Breeding Stock, since Whichever Puppy we Bought, Would Become A 10-12 Year Member Of Our Family & Hopefully Longer Than That.

I Don’t Want To Brag . . . But When It Comes To German Shepherds, Anne & I Have Forgotten More Than Most People Will Learn.

SO – You Might Understand . . . Why Anne & I were Very Reticent about Buying a German Shepherd Puppy (Especially At A Hefty Price) from a Breeder who had 5-Puppies from the Same Litter for Sale, When we Couldn’t find Any Breeder in all of Canada with any Puppies.

In Our Transaction For Tavor . . . Not Only Did we Find a Phenomenal Breeder and a Great Puppy, but we Also Learned a Tremendous Lesson about the Sikh Religion.

The Breeders Were A Sikh Family . . . Absolutely Dedicated to German Shepherd Dogs, Boarding all Dogs, Using their Dogs for Drug & Explosive Sniffing for Outgoing Cruise Ships & Training Police & Military Worldwide on How to Train their own Service Dogs.

As It Turned-Out The Breeders Were Also Famous For Dog Rescues From Bad Circumstances Throughout Mainland British Columbia.

HERE WAS OUR BIG QUESTION?

Why Do You Have Puppies When No One Else Has?

The Answer Brought-Us Partly To The Culture of Sikhism . . . Where Unknown to us, in the Sikh Religion, Dogs are Revered, and it’s Far More Important for the Sikh Breeder to Find the Right Home for their Puppies, than it is for the Breeder to Make the Most Amount of Money from the Sale of the Puppies by Being Indiscriminate Where the Puppies Wind-Up.

Anne & I Asked The Breeders A Gazillion Questions . . . About their Dogs, from the Males, Females, Puppy Lineage & Breeding Program . . . all the Way to How they Wean their Puppies, for which they Didn’t Hesitate for a Second with all the Right Answers . . . But What Impressed Us Most, was that the Breeders Asked us a Gazillion Questions, Testing us on our Knowledge of Dogs, but Most Specifically on What we Knew about German Shepherd Dogs.

It Didn’t Take Long Before Anne, I & The Breeders Bonded, Especially Since We Were Very Doubtful that we were Going to Make a Deal on a Dog with them for Various Reasons.

One – The Price was Way Out of Our Range. Two – We Suspected they were Something (Puppy-Mill) . . . Which They Were Definitely Not.

Also . . . There Was A Very Unexpected Circumstance, in as Much as When the Breeders Placed the Three Male (3-Week-Old) German Shepherd Puppies on the Grass, one Immediately Fell Asleep. The Second Sat in One Place Looking up at the Clouds, while the Third Wiggled his Plump Behind . . . About 6-Feet To Lay On My Foot.

When I Pushed-Him off my Foot & Took Several Seps Backwards to see What he would do, this Same Puppy, Got-Up & Waddled-Over to Lay Down on my Foot Again. And Unbeknownst to me, Anne also Selected this Puppy out of the Three as a Possible Puppy for us to Purchase.

At One Point . . . I Asked The Husband . . . “Because You Breed & Train Shepherds For The Police & Military – How Do Your Dogs React To The Crack of Gunfire”? I Asked this Question, Because Anne & I Go to the Shooting Range Quite Often & Once a Dog Comes Into our Home and our Life, Where We Go . . . Our Dog Goes.

The Breeder Looked At Me Quizzically & Asked – “Why? Do You Have Guns”? To which I Answered . . . “Lots Of Guns. My Wife & I Both Shoot & Are Members Of Several Shooting Ranges In Canada & The United States”. At which Point, I figured, Being in Uber LEFTIST British Columbia on the Mainland Nonetheless, this Relationship was Just About to End . . . The Husband Looked at me and Said . . . “I Just Got A Brand New Israeli Tavor . . . Do You Want To See It”?

There Is No Excuse For The LEFT

We Know Who They Are

Nothing Beats Knowledge By Experience

The Hypocrisy Of It All

I Cancelled Them & Kept Them Cancelled

Censorship Is The Ultimate Attack On Freedom