HONEST ELECTIONS ARE THE MOST IMPORTANT GUARANTEE TO FREEDOM:

Tomorrow 9/11 – Anne & I Will Be Standing In Silence Before Our American & Canadian Flags Remembering 9/11.

IF YOU LOVE FREEDOM & CELEBRATE REAL WARRIORS – HATE THE NFL:

While Anne & I Memorialize 9/11, and the Deaths of Thousands of Innocent People at the Brutal Hands of Islamist Butchers . . . Men who Wear Football Costumes – NOT UNIFORMS, since Soldiers, Airmen, Sailors & Marines Wear Uniforms, Police Wear Uniforms, Firefighters & EMS Wear Uniforms – Will Disparage All The Real Heroes, Their Sacrifices & The American Flag . . . While These “Nobody’s” In Life Take A Knee To America Believing They’re Something Special When They’re Not.

For Grown Men Being Paid MILLIONS Of Dollars To Play A Kid’s Game Who Wear Costumes – I Won’t Take A Knee . . . But I’ll Stand For America & I Won’t Dignify their “Game” by Giving them a Second of my Attention – At a Stadium, on Radio, over the Internet or on Television . . . Unless It Is To Applaud Their Failure.

HAVE YOU NOTICED SOMETHING MISSING – I MEAN REALLY MISSING?

What Ever Happened To The Socialist Anti-Freedom, Anti-American, Anti-Jewish, Anti-Israel Voices Of The Squad?

Why – All Of A Sudden Has The Squad . . . Alexandria Ocasio-Cortez, Ilhan Omar & Rashida Tlaib Lost their Voice in this Aggressive Election Campaign as America Burns? Why has the Squad become Mute, when in Fact, you would Imagine that During this Heated Campaign these America-Freedom-Haters should be Loud & Proud?

The Squad Is The Truthful Embarrassment To The Democrats Strategy To Create Their One World Socialist Government.

PRESIDENT TRUMP WILL WIN A MASSIVE VICTORY ON NOVEMBER 3, 2020:

But . . . Given all that we Know, which is Plenty, the Democrats will Cheat their Way through Colossal Voting-Fraud by Way of Unsolicited Voting Ballots, to either Give themselves a Tarnished Victory Days, Weeks or Months After the November 3rd Election, or will so Badly Corrupt the Actual Vote, that the Results will be Disputed & Tied-Up in the Courts to the Point of Real Revolution.

HONEST ELECTIONS ARE THE MOST IMPORTANT GUARANTEE TO FREEDOM:

Everything In A Free Society Begins & Ends With Legitimate Elections.

My Solution For An Honest Election Is Simple . . . The Election is Slated for November 3, 2020 – when all Votes Need to be Registered. So How About . . . All Votes Received Past Midnight on November 3, 2020 in the Time Zone of where Each Vote is Registered . . . Should Be CANCELED?

Furthermore . . . How About Putting all Unsolicited Votes through a Political/Legal Microscope to Make Certain they were Not Part of Voter-Fraud?

AND MAKE IT CLEAR . . . I Mean Really Clear – That Anyone Convicted of Voter-Fraud should Suffer One Year in Prison – And Forfeit his or her Right to Vote for their Lifetime. And if the Vote-Fraudster is Not an American Citizen, he or she should go to Jail, Forfeit all his or her Belongings, and after Serving his or her Time in Prison . . . DEPORTED FOREVER.

I’M NOT IN THE MERCHANDISING BUSINESS . . . BUT:

On Saturday (September 12, 2020) We are Hoping that Thousands of Canadians Will Converge on Parliament Hill in Ottawa (Canada), to Express Our Outrage at the Liberal’s (Trudeau & Company) Illegal & Dishonest National Gun Grab.

ANNE, STRYKER & I WILL BE THERE:

Unfortunately – Only Available To Canadians . . . As I Wrote in My Last Editorial, I Designed, and had Made for me a Few Caps to Celebrate Conservative Canada, The USA & Our Two Nation’s Police Forces (Cops). And as a Result of that Editorial, a Significant Number of Readers of Galganov.com have Requested these Caps . . . So This Is What I Did.

I Would Love to Sell these Caps to the American Readers of Galganov.com, but the Postal Cost is More than (Almost Double) My Production Cost. 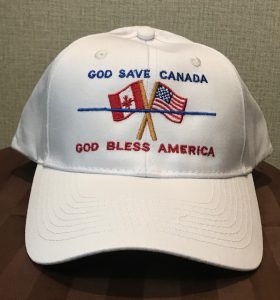 Several People Have Paid through E-Transfer (Unavailable To Americans) to have these Great Hats – so for People who Want to Receive these Hats Personally from me . . .  Anne, Stryker & I will be Standing at the Eternal Flame at Noon on Parliament Hill with their Hats. And for Some other People who Wanted Hats, who will Also be at the Pro-Gun . . . Pro-Freedom Demonstration On Parliament-Hill, I will have about A Dozen Extra Caps – First Come First Served.