THE PENDULUM IS SWINGING & NOW’S THE TIME TO STRIKE & TAKE A STAND FOR FREEDOM!

By Unbelievable Demand . . . Here Is The Photo Of Our Texas Chanukiah & Flags Of Freedom Flying: 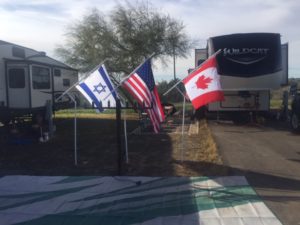 IT JUST DOESN’T GET ANY BETTER:

What a Wonderful Few Days – Yesterday (December 22) was the First Night of Chanukah . . . Which Commemorated The Second Century’s (BC) Successful Life or Death Fight for The Freedom of the Jewish People Against Overwhelming & Formidable Forces.

Between Comments & Emails From Galganov.com Readers . . . For Me To Publish A Picture Of The Chanukkiah & Flags Of Freedom – Here It Is.

Tomorrow (December 24th) Is the Day the Light of my Life was Born 69-Years Ago, who is as Beautiful Today as the Day we Married more than 46-Years Ago. And as Anne & I Grow Older Together . . .  It Only Gets Better.

In 2-Days . . . It Is Estimated That As Many As 2.5-Billion Christians will Celebrate the Birth of their Savior Jesus Christ, with Christ’s Message of Peace & Harmony For All Mankind – Anne & I Wish All Our Christian Friends A Most Deserved Merry Christmas.

THE WORLD IS A DANGEROUS PLACE – ALWAYS WAS – ALWAYS WILL BE:

If Ever There was A Time To Celebrate . . . That Time Might Be Now, as the Forces of Light & Freedom are Beginning to do Battle Against  the Socialist Hordes Worldwide, in their Socialist Attempt to Create what they Believe would be a Communist Utopia, with a One World Government, which in Essence, would be a Draconian Dystopian Society Akin to what was Written some 70-Years Ago by George Orwell . . . In His Epic Novel 1984.

BUT FINALLY . . . We’re Fighting Back. President Trump will be Re-Elected. The Senate will Stay in Republican Hands. The House will Flip Back to the Republicans, and the RINOS will Either Shut-Up or Get-The-Hell-Out.

Britain Elected A Real Conservative . . . Who has Told the LEFTIST European Union where they Can Shove their One World Government, as Boris Johnson is on the Cusp of Formulating what will Probably be the Greatest Free/Fair Trade Deal in Britain’s History, with the United States of America or Any Country.

Australia Has Gone Conservative, Canada Re-Elected Trudeau to a Minority Liberal Government, but the Canadian Conservatives are in the Process of Choosing a New Leader, which will Most Probably Usher-In . . . SOONER RATHER THAN LATER, a Conservative Majority.

Israel is in the Throes of its Third Election in Less than a Year, as Liberals try to Prove their Phony Conservative Credentials, and the Israeli Courts are Trying to Usurp the Will of the People . . . But The People Of Israel Won’t Be Fooled.

And All Around The Globe . . . Conservatives are Beginning to Show their Teeth, as the LEFT shows their Desperation.  The Fight Is Millennial – Thousands of Years In-The-Making Between Good & Evil . . . To some this Battle is Spiritual, to me It’s a Never-Ending Contest for the Survival of Freedom.

THE PENDULUM IS SWINGING & NOW’S THE TIME TO STRIKE & TAKE A STAND FOR FREEDOM!

If You Believe In God . . . Then Believe This – God Gave Humanity the Intelligence & Ability to See the Difference Between Good & Evil, and the Wherewithal to Fight the Axis of Darkness – Therefore, it is up to Us & Us Alone to Vanquish Evil as the Allies of Light & Never Assume that Evil will Relent or Vanish, because Evil Comes in Many Guises, and Waits in the Shadows for us to Become Weak & Apathetic.

And If You Don’t Believe In God . . . Then Believe In What You Perceive To Be Real.

Our Turn Is Now!