The Mainstream Media Is The Problem

IN ANSWER TO MANY REQUESTS:

OUR GREATEST WEAPONS . . . FREEDOM OF EXPRESSION & AN HONEST PRESS:

I Wasn’t Going To Write Today . . . I Wanted to Spend this Friday as a Day of Rest, Where I Could Catch-Up on some Fun-Work Around the Property – I also Have to see the Doctor Today over the Above my Ankle Infection – (It Sucks To Be A Diabetic), which has Been a Worrisome Bother Now for More than 1-Month. But It’s Slowly Getting Better.

I Wasn’t Going To Write Today But . . . Yesterday, Late Afternoon, I Made the Big Mistake of Watching The Five on Fox News, which is Usually One of the Least Objectionable Daytime Shows on Fox News, Until they Broke Away from their Normal Programing to Air Biden’s Medal Ceremony on the White House Lawn, for the Capitol Hill Police’s Response to the FAKE Insurrection On January 6, 2021.

I Usually Like To Watch The Chris Salcedo Show Over The Internet On Newsmax (5pm–6pm), which I Find to be More Informative & Far More Supportive of Conservative Values than Anything on Fox Daytime Programing, But Every Now & Then I Tune Into Shows on the Other Networks to See & Hear What’s Happening in their Programing.

At Around 5:30pm . . . Fox News Broke Away from Its Normal Programing to Broadcast the White House Lawn Ceremony, which, as Aggravating as it was for me to See this Propaganda, I Realized that what was Happening on the White House Lawn was News & Needed to be Broadcast . . . HOWEVER – Once Biden Signed his Executive Order to Authorize the Awards and the Ceremony was all Done, Fox News Stayed on the White House Lawn Highlighting the Likes of Nancy Pelosi and the Cabal Destroying America for a Great Deal Of Time . . . For What Purpose?

Did Fox News Not Assume That People Like Me Were Not Sufficiently Insulted By Watching This Propaganda?

Not Only Was This Display A Piece Of Propaganda – It Was Also Inaccurate, Especially when Biden Claimed Thousands of People Stormed the Capitol Building & Claimed . . . 4-Officers Died As A Result.

Thousands Of People Did Not Storm The Capitol Building & 4-Capitol Police Were Not Killed By The Riot.

Forgetting that the Only Person Who Died (Murdered) During the Capitol Hill Riot Was an Unarmed Woman, Retired Military Veteran Ashli Babbitt, who was MURDERED by an Officer of the Capitol Police Detachment . . . Who For Whatever Reason – His Identity Is Being Protected By Nancy Pelosi & The Department Of Justice.

IN ANSWER TO MANY REQUESTS:

Yesterday Was Tavor’s 5th Month’s Birthday & The Day 5-Months Ago When We Decided To Relieve Stryker From His Discomfort.

Anne, Tavor & I Just Came Back from a Long Walk Through the Hay Fields on the Horse Farm Where we Keep our Horses & Lease Property for our Two RV’s, Covered Outside Kitchen & Dining Deck, Cabins, Anne’s Miata Garage . . . And Where I Keep my Motorcycle in my “Man Cave” Cabin.

The Last Time we Weighed Tavor at Four and a Half Months, Tavor Weighed 53-Pounds. I’m Guessing That Today, Tavor Is Close To 60-Pounds. We will Weigh Tavor Again in a Couple of Weeks when we Have to Work-Out the Dosage on his Heartworm Pills & Other Normal Medications.

So . . . In Answer to your Many Requests for Photos of Tavor, Here is One we Took Today on Tavor’s 5th Month Plus One Day Birthday . 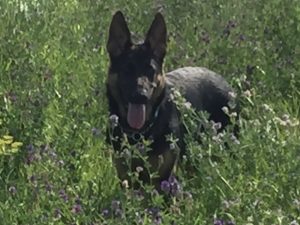 Have A Great Weekend

There Is No Excuse For The LEFT

We Know Who They Are

Nothing Beats Knowledge By Experience

The Hypocrisy Of It All

I Cancelled Them & Kept Them Cancelled

Censorship Is The Ultimate Attack On Freedom